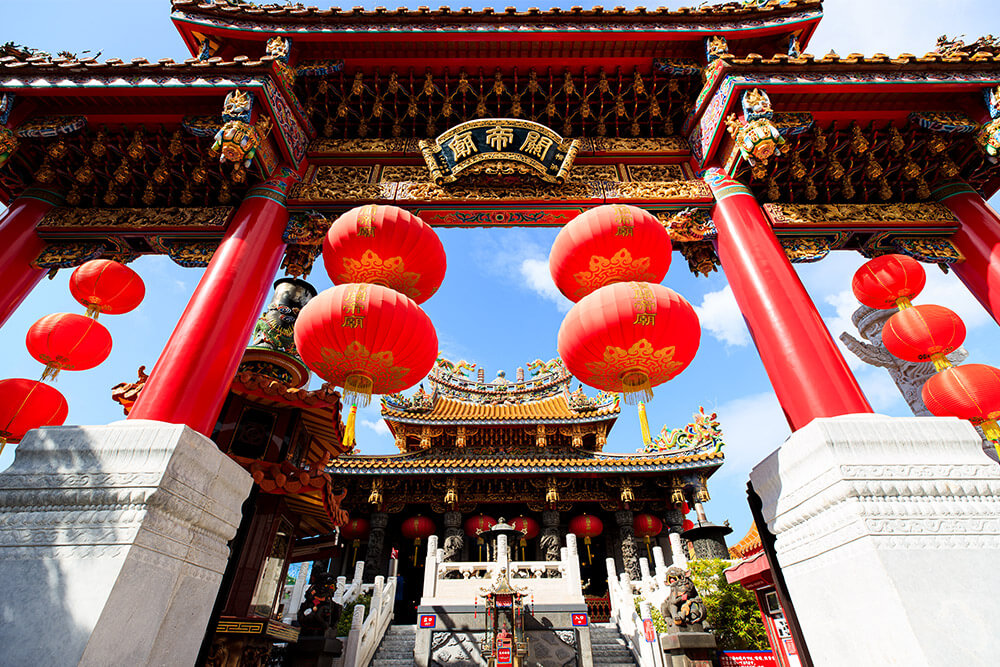 The current structure of Kuan Ti Miao in Yokohama Chinatown was inaugurated on August 14th, 1990 and is the fourth rebuild of the temple. The original temple was built in 1871 but destroyed in the Great Kanto Earthquake of 1923. The second reconstruction was ruined in an air raid during WW2 in 1945, and the third was lost due to a fire of unknown origins in 1986.

Many of its components and craftsman hailing from China. The dragon marble slabs shipped from Beijing that flank the entryway from the main road to the temple were each carved from one continuous piece of marble weighing 4.5 tons. The colorful dragon cornices that adorn the tops of the temple gates and roofs where crafted in Taiwan and carefully shipped to Yokohama as were the four ornate pillars that root in front of the inner temple entrance.

Chinese incense and gold offering paper can be purchased at the information center. Assistance on the worship process and fortune-telling is provided by staff throughout the temple. 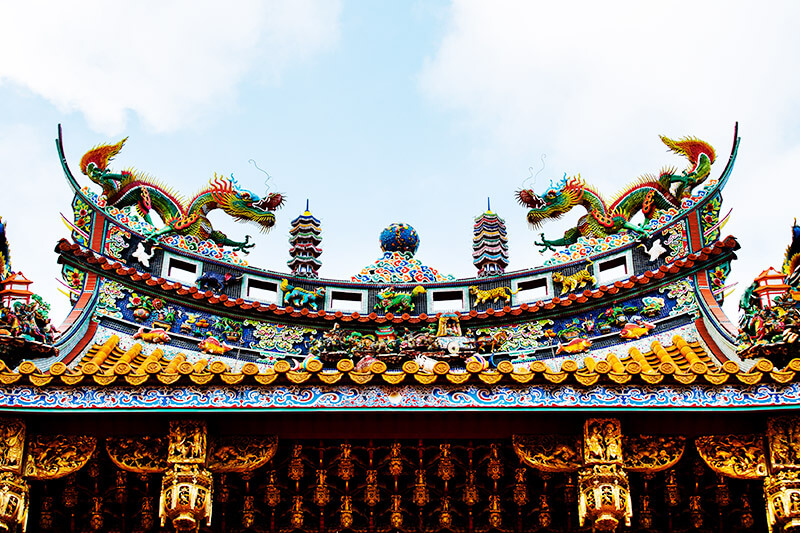 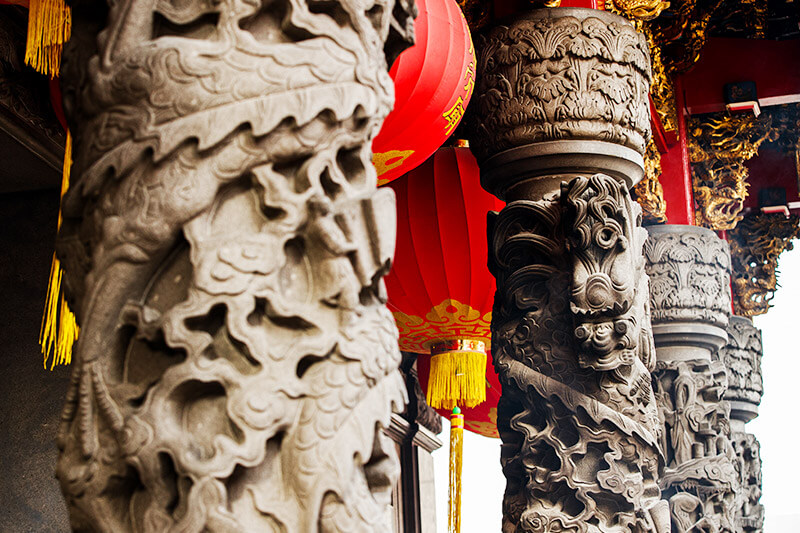 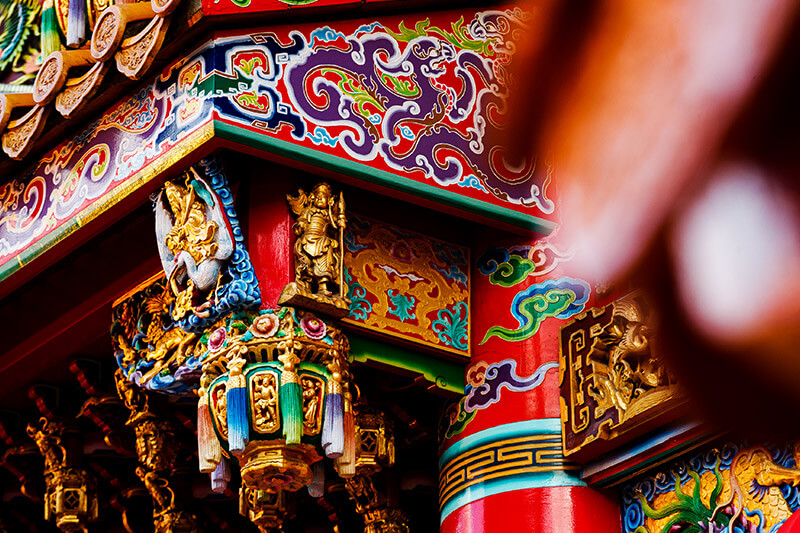 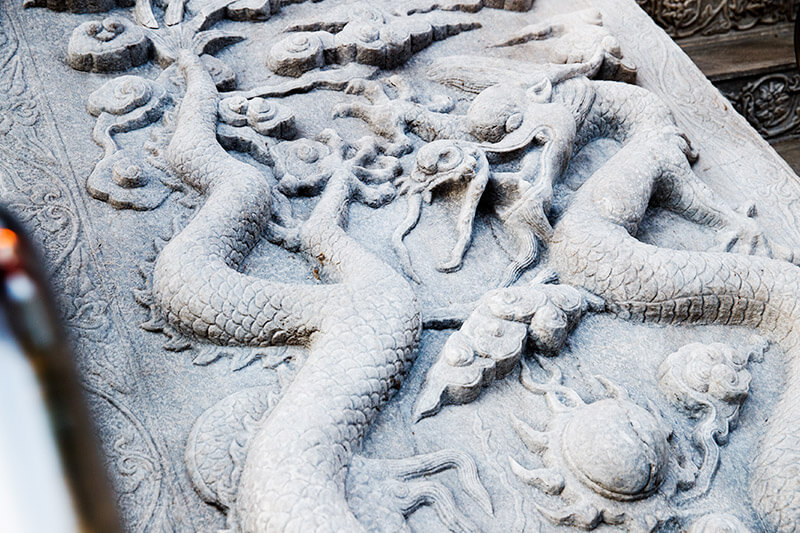 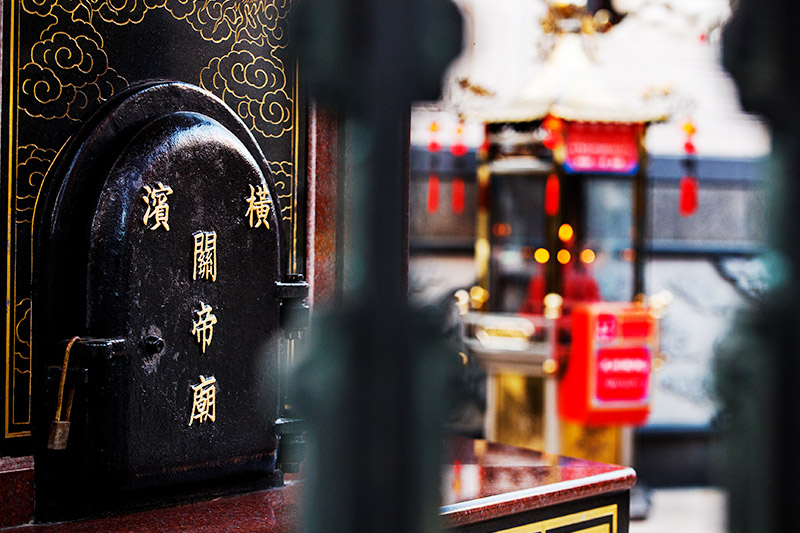 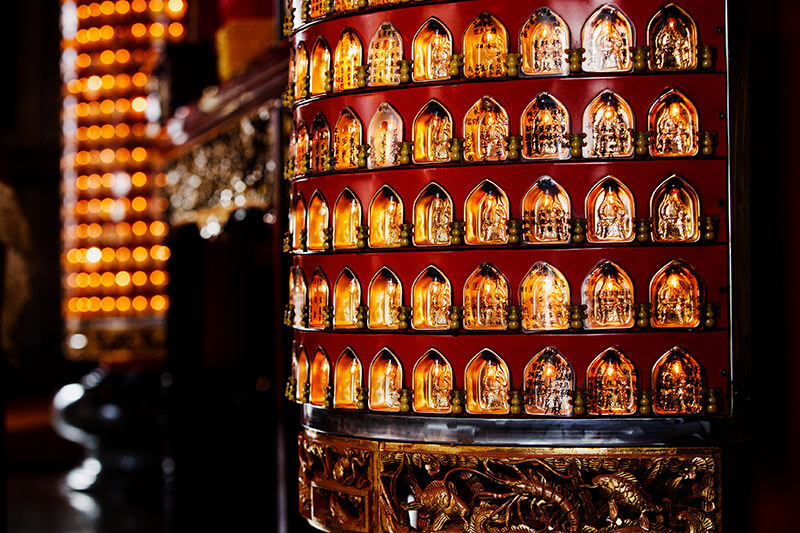 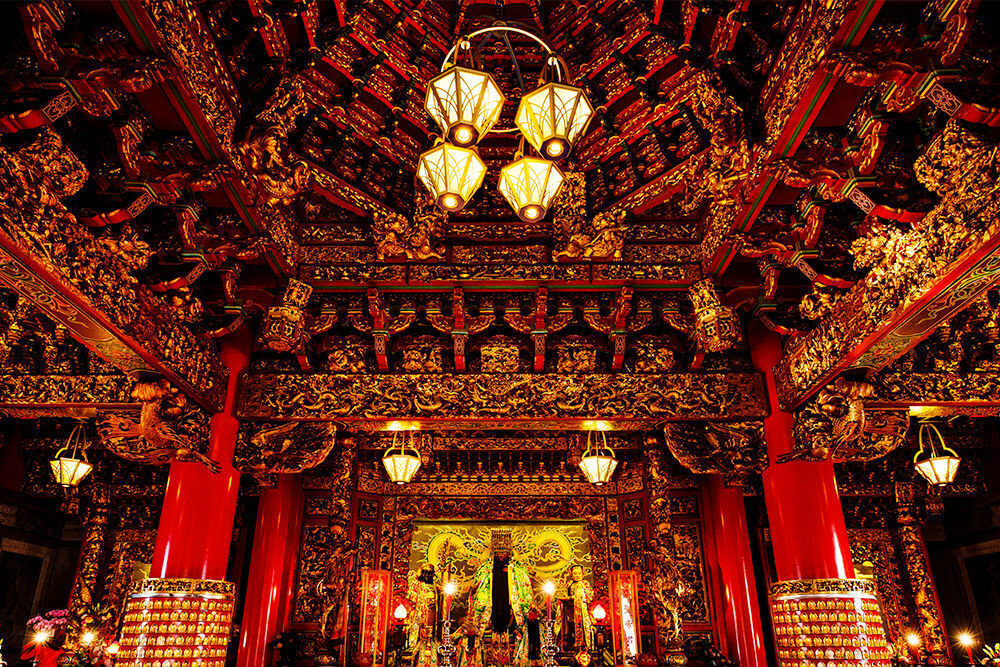 In Chinese mythology, the Jade Emperor is the monarch of all deities and is the ruler of Heaven and Earth. As such, he protects universal peace and everything related to human life. The ceiling of Kuan Ti Miao soars skywards to draw the worship to the Heavens where he is said to reside. 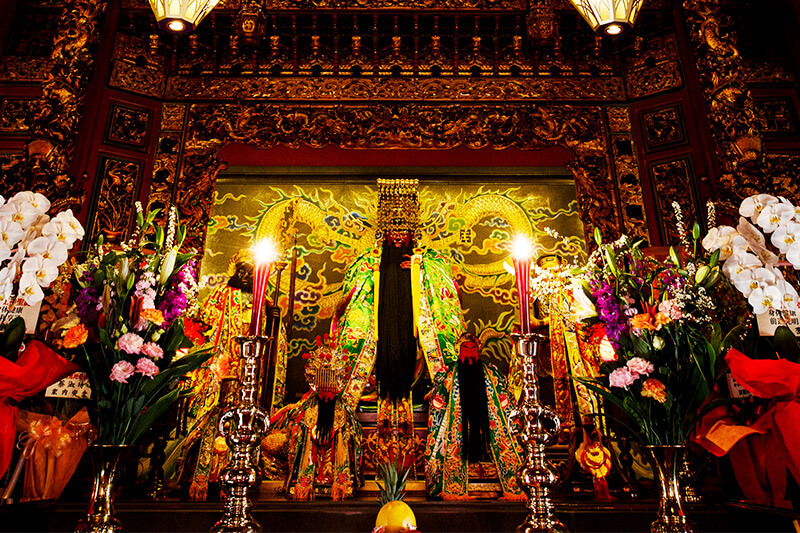 Often referred by his Taoist title Guan Sheng Di Jun, Holy Emperor Lord Guan, this God of War is often portrayed with a red face. He is the symbol of integrity, strength, and courage during great challenges. In time, he has come to represent benevolence and today he is commonly worshipped as the God of Wealth. 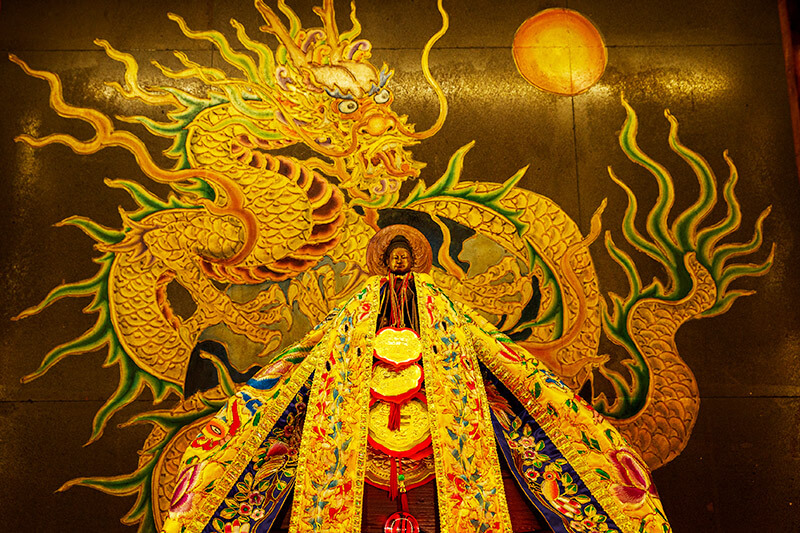 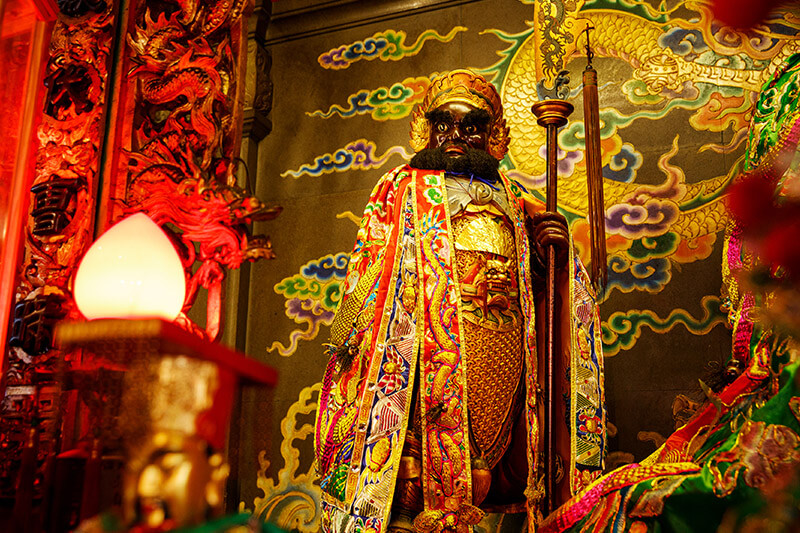 Often portrayed with a black face, this fierce warrior is the divine guardian at the Kuan Ti Miao. According to Chinese mythology, he is the weapon bearer and protector of Guan Yu’s Green Dragon Crescent Blade. Zhou Cang killed himself upon learning that Guan Yu and Guan Ping were executed. 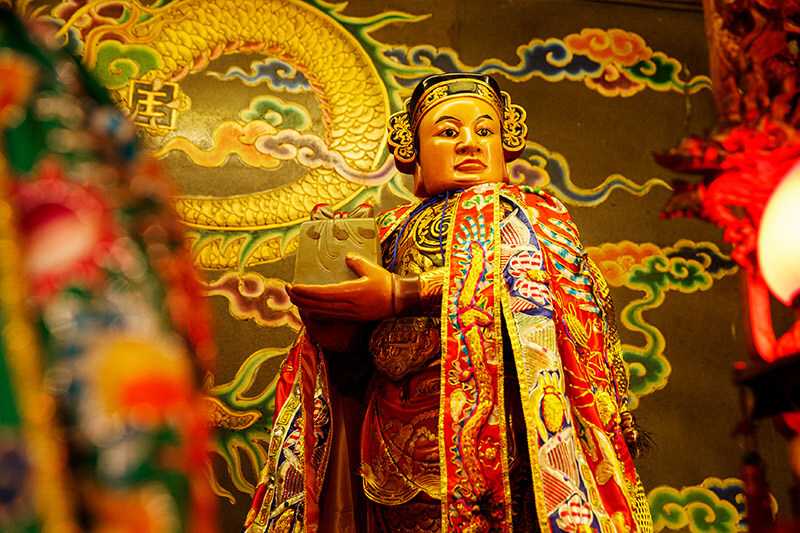 The other divine guardian at the Kuan Ti Miao is Guan Ping, the son of Guan Yu often depicted with a white face. Along with his father, he is also considered a God of War and is respected for his loyalty and bravery. 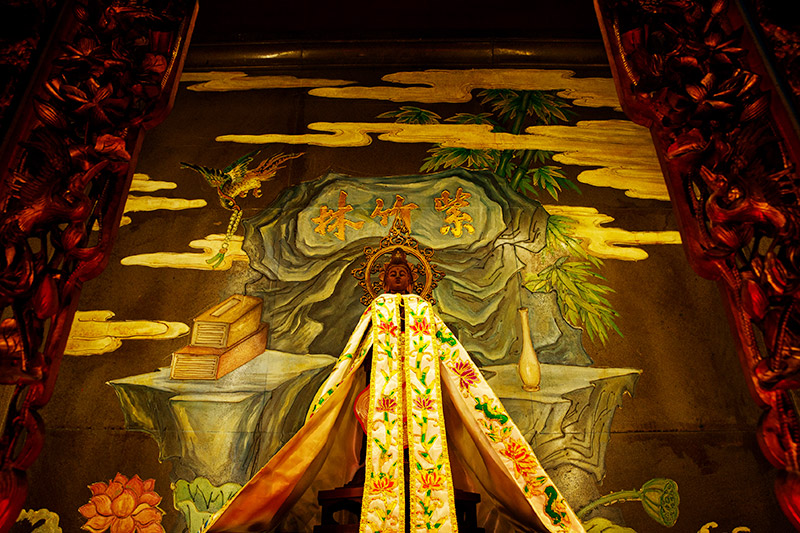 This beloved Buddhist Bodhisattva represents kindness, mercy and compassion. Guan Yin is the protector of health and fertility and brings union and clarity to seekers. 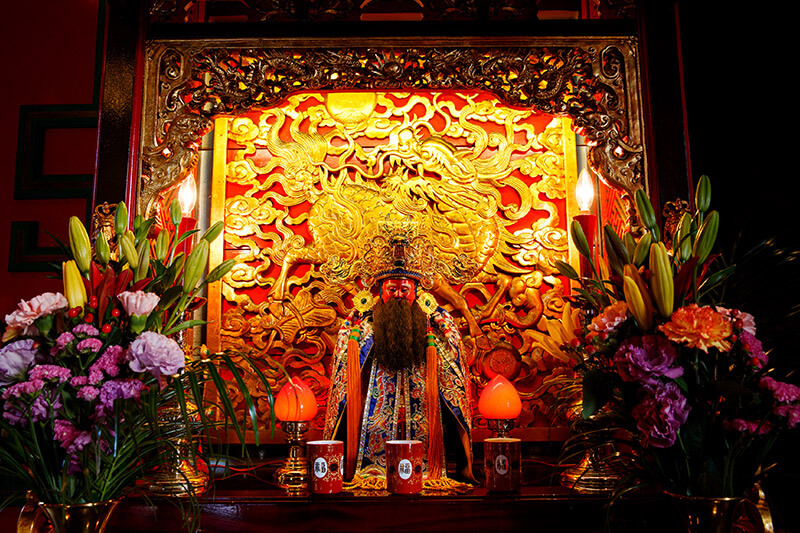 Also known as Tudigong, this God of Nature is revered by merchants, miners, and fishermen as a protector and provides abundance and fortune.